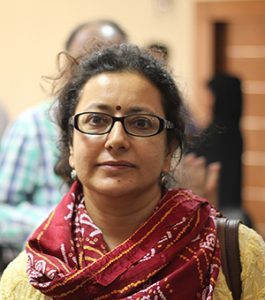 Prita Jha is a legal activist, researcher and trainer who has been engaging with issues of access to Justice for survivors of “unconstitutional violence “in various capacities in India over the last fifteen years. She is the founder and President of Peace and Equality cell (PEC). Peace and Equality Cell provides free legal representation survivors of child sexual abuse. PEC has made very effective intervention on the issue of poor state of women’s shelters in Gujarat by filing a Public Interest Litigation (PIL). This has led to a new set of rules being notified for all Shelters in Gujarat.

Most recently PEC has started building its team and collective capacity on the Rights of Persons with Disability Act 2016. Additionally, in collaboration with two NGOs Samvet and Samegra Seva, PEC provided provide covid relief measures and promote vaccination in five districts of Bihar. Last but by no means least, Prita’s dream to work on access to Justice for survivors of child sexual abuse in Bihar, where she originates from, is slowly taking shape.

Prita is the co-editor and co-author of two different books with Professor Surabhi Chopra and Advocate Warisha Farasat. Both books examine the Indian state’s record and response fulfilling its obligations to provide justice and reparation to victims across different episodes of mass violence.

Prita has also taught courses on Gender and law, Criminal justice Administration and RTI and “NGOs and Civil Society “at Nirma University, Gujarat. Prita has published articles on Open Democracy on various aspects of implementation of the Domestic Violence and Child Sexual Abuse legislation in India. During the COVID lockdown she appeared on various webinars addressing the shadow pandemic of violence against women and children. Prita’s conversations with Karla Bookman, founder-editor of the influential cultural magazine, Swaddle, have proved popular with social media audiences. 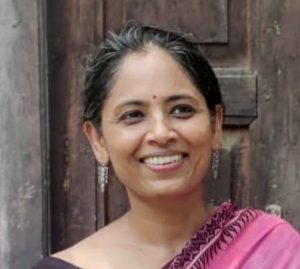 Vasundhara Rangaswamy is a family medicine physician in training and a rural health fellow in India. She has a background of a clinical laboratory scientist, medical microbiology, infectious diseases and global health. She has received medical and lab education from Gujarat, India, Stanford Hosp. and clinics, California and Univ. of Alabama USA and in parts of S. America, Africa and SE Asia. Throughout her career, Vasundhara has also been deeply involved with AID. She is connected in different capacities, with multiple rural health care organizations in different states of India like Odisha, Tamil Nadu, Rajasthan, Gujarat, Chhattisgarh, etc. She has supported global projects on lab capacity building, clinical and laboratory protocol development, low-cost technology design and community awareness. Concurrent to her rural health fellowship and fam med training program, she has been working with various NGOs on preparation of COVID-19 for low-resource settings (here), improving COVID-19 vaccine acceptance and uptake (see BBC article), provision of healthcare provider and community health worker trainings, procurement of PPE for Indian health workers and facilitated transport operations during the migrant laborer crisis as well. Dr. Vasu is a former AID bay area volunteer and is currently in India. She was deeply involved in training community health workers during the second and third wave and has worked with other AID volunteers and partners in the process. During 2020-2021, she was also a rural health Travel Fellow through Tribal Health Initiative, Sittlingi. 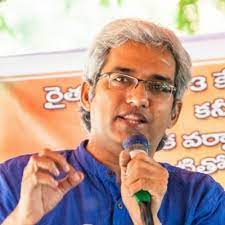 Kiran Vissa is a long-time social activist who works on issues related to the agrarian crisis and sustainable organic agriculture in India. Over the last decade, Kiran has become a key figure in the farmers’ movement in India. He is part of the National Working Group of All India Kisan Sangharsh Coordination Committee (AIKSCC), a coalition of 200 organizations across India. He leads a farmers’ organization Rythu Swarajya Vedika in Telangana and Andhra Pradesh and has been implementing AID’s initiatives in these states to prevent farmer suicides and address issues of rural distress.

Kiran has been a key AID figure since its formative years and has worn many hats of leadership and organizational roles. While Kiran’s work has focused on agriculture and farmers’ issues, and consumer awareness on food, he dedicates time towards volunteer mobilization and citizen activism, and tackling organizational challenges within AID. Kiran holds a B.Tech. from IIT, Chennai and an M.S. from University of Maryland. After several years of volunteering, Kiran quit his job in the USA and is now based in Andhra Pradesh, devoting his time to key issues in the farmer’s movement in India. 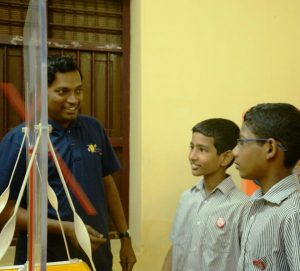 Ravishankar Arunachalam is the founder and Chief Executive Officer at Chudar, an afterschool program based in Chennai focused on well-rounded education of underprivileged children in 6th-8th grades using innovative approaches to STEM education. Chudar has developed new tools for teaching Math and Science which has now been adopted by the Tamil Nadu government. Additionally, the Chudar team is actively working on Math and Science curricula for TN government schools. During his time in the US, Ravishankar was an active volunteer with the Pittsburgh and Austin AID chapters and a member of the AID Executive Board.

Ravishankar has served as the Joint Secretary of AID India and coordinated the secondary education and equitech programs of AID Tamil Nadu. At AID India, he co-developed the science lab in a box for which AID INDIA received the MIT Indus Technovators Award. He is the author of various popular science and math books, and developed innovative kits and educational resources for children. He was part of the Tamil Nadu government secondary education curriculum committee and authored the class 6 maths text book when the new syllabus was introduced. He has been a resource person for UNICEF and NCERT, and has made invited presentations on education at conferences in India and abroad. Ravishankar has been working in the field of children’s education for the past 12 years, prior to which he was a full time faculty at I.I.T. Previously he worked at IBM, where he got 3 US patents. He holds a Ph.D in engineering from Carnegie Mellon University and a B. Tech from IIT, Madras. 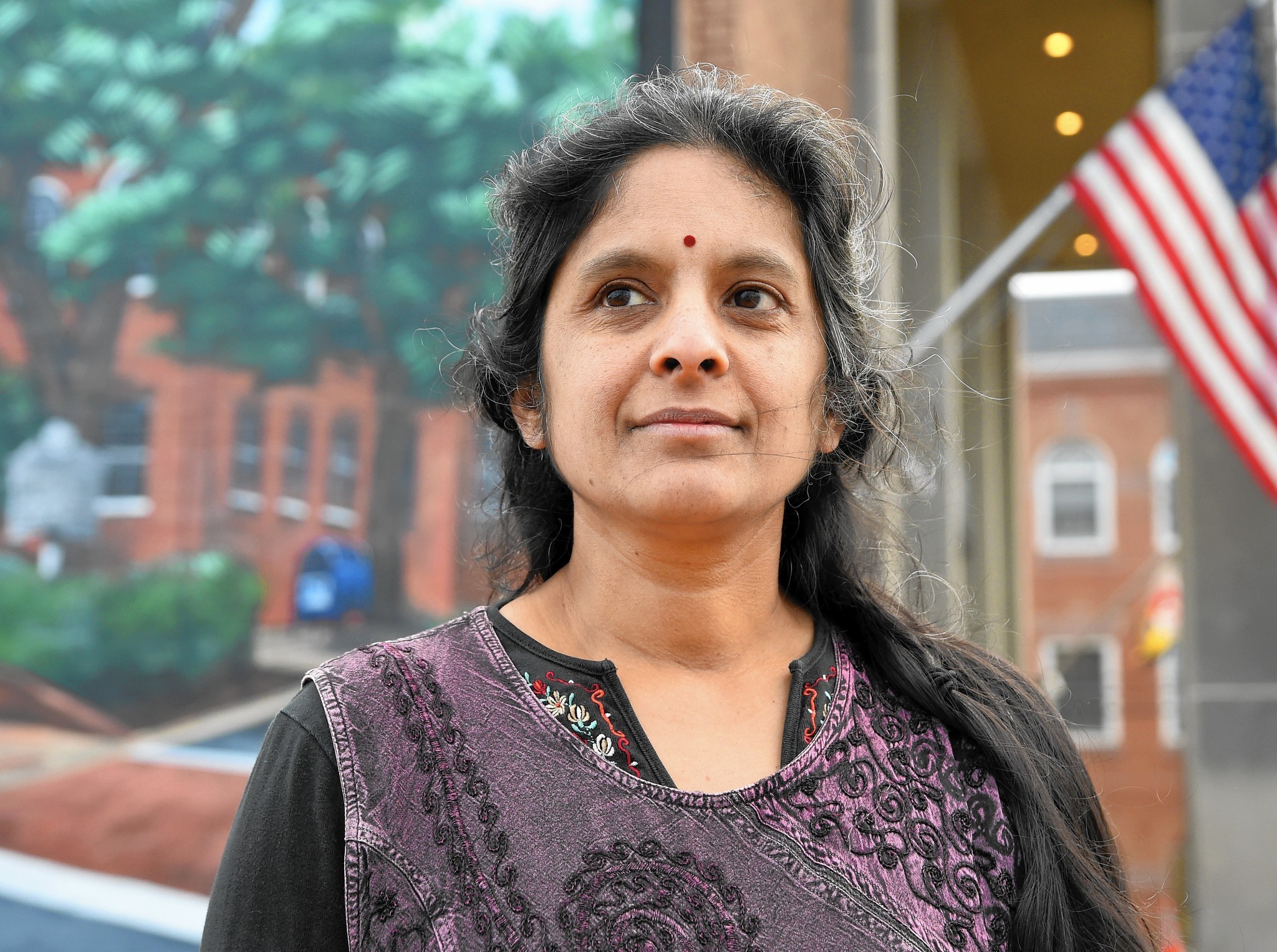 Aravinda Pillalamarri is devoted to the cause of social justice. Raising awareness on fair trade and sustainable livelihoods, she works with tailors designing and marketing khadi (handspun) garments with a view to sustaining traditional living in modern times. Recognizing the role of natural birth, breastfeeding, babywearing, sleepsharing, natural hygiene and free learning in promoting maternal and child health and empowerment, she works with parents and teachers in better understanding the value of these practices, how they are already in use, and how they are threatened and resources required to sustain them. In this context she also envisions programs that help people take control of their learning, food security, and health, such as village libraries, kitchen gardens, whole foods, and accountability in government services to mothers and children. She also serves on AID Publications Team, working to ensure that people who are marginalised by poverty, oppression or disasters appear as central and active driving forces for change rather than as victims or targets. Through this AID newsletters, calendars and occasional publications help urban middle class people to understand the perspectives and analyses voiced by the people central to the processes of social change, who are too often marginalized from prevailing development planning owing to poverty and oppression. You can find her articles at AID’s publications page and for one here Believe in your dreams, in yourself!! Her articles have also appeared in Economic and Political Weekly, The Hindu, India Together, The Alternative, Manushi, Himal South Asia, Teacher Plus, Z Magazine, and other publications. Aravinda’s role in AID has changed from Jeevansaathi to Development Coordinator. 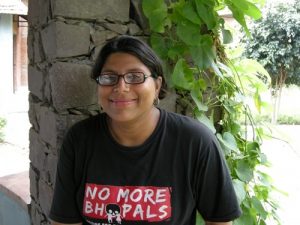 Rachna Dhingra is known for her work in Bhopal with survivors from the world’s worst industrial disaster – the gas leak from Union Carbide’s plant that has killed 20,000 people since 1984. A compassionate, determined and resourceful leader, Rachna moved to Bhopal from Ann Arbor in January 2003. Since then, she has immersed herself in the work of obtaining compensation to survivors, initiating efforts for clean drinking water, generating employment, and mobilizing local and global communities.

Rachna joined AID Ann Arbor chapter in 1999, when she was an undergraduate studying business administration. Always interested in developmental issues, she found a perfect outlet in AID. Her no-nonsense talk and her limitless energy became legendary. She developed an interest towards activist and women’s issues, keenly following the struggles in the Narmada valley and in Bhopal. In Ann Arbor, she and other AID volunteers set up the Bhopal Action Network to echo the concerns not only of the Bhopal survivors, but also those of survivors from chemical disasters all over the world. This network has been a continuous thorn in the side of Dow Chemical, located a short distance away from the university in Midland, Michigan. After graduation, Rachna joined Accenture where her first client, ironically, was Dow Chemical! After just a few months in this job, she followed her passion and quit to join the peoples’ struggle in Bhopal. 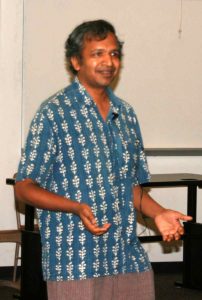 While a graduate student at University of Maryland, Ravi Kuchimanchi founded the Association for India’s Development (AID) in 1991 with the vision “problems are interconnected, so must be the solution.”  AID has matured into a volunteer movement for sustainable, holistic development with 30 chapters in USA, and AID-Australia, AID-UK and AID-India. It brings highly skilled professionals such as the Non-Resident Indian community, to partner with the poor, and underprivileged so that there is a deeper understanding of causes beyond the mere symptoms of poverty. Ravi was recognized by the American Physical Society (APS) with the Andrei Sakharov Prize in 2018 for “outstanding leadership and/or achievements of scientists in upholding human rights.” 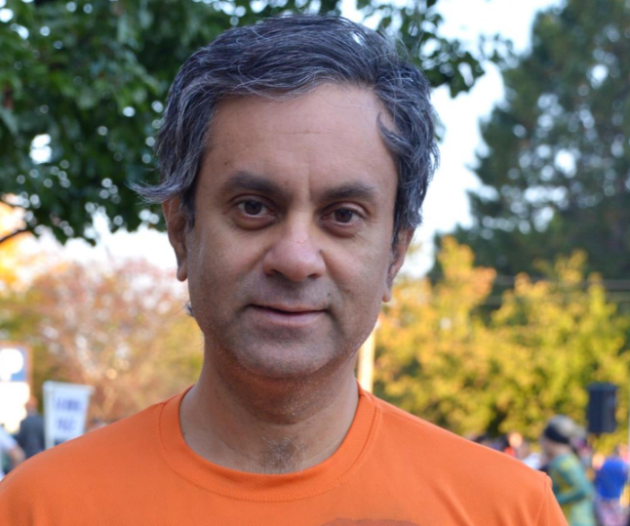 Somnath is a Development Coordinator with the Association for India’s Development (AID) with a twin focus of strengthening organizational processes within AID and to connect, work with and learn from marginalized communities in India. Prior to this role, he was an active volunteer for AID for more than 10 years. He was instrumental in starting the involvement of AID in the Sundarbans on sustainable organic agriculture in 2009. Today, due to these efforts, over 30,000 Sundarbans farmers sell >10,000 kgs of organic produce per month in Kolkata thereby increasing their income by 25%. Somnath also helped organize a community-driven watershed development program in 4 districts of Jharkhand. Since this program began in 2018, groundwater levels have risen significantly, resulting in markedly improved agricultural yields for the communities in the region. Coordinating with AID partners in Orissa, Jharkhand, Chattisgarh and West Bengal, Somnath has also been leading AID’s efforts in helping forest dwelling communities obtain rights to the land they have been inhabiting for centuries along with the rights to protect and conserve forests. Since the initiation of this work in 2014, several communities have obtained land titles and seen improvement in livelihood by adopting practices like cluster farming.