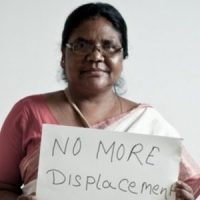 Dayamani Barla is an adivasi activist, also known as Iron Lady of Jharkhand. She went through school and university with great difficulty. She supported herself working as a day labourer on farms and then working as a maid. She worked in Prabhat Khabar and other newspapers to bring to light the injustices faced by the adivasi communities. Although livelihood was a big challenge, she never compromised her voice that spoke for the rights of adivasis. She and her husband run a teashop to support themselves. Dayamani has led many struggles against large  scale displacement of adivasis.

Dayamani has won the Counter Media Award for Rural Journalism in 2000 and the National Foundation for India Fellowship in 2004 and the Ellen L. Lutz Indigenous Rights Award (http://www.culturalsurvival.org/news/indias-dayamani-barla-selected-cultural-survivals-ellen-l-lutz-indigenous-rights-award) in 2013.