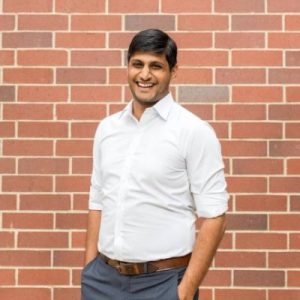 Harish I. Patel is deputy director of New America Chicago. Coming from an urban planning, community organizing, and social entrepreneurship background, Patel is an advocate for connecting innovative and inclusive local policies to regional and national political movements.

Patel moved to Illinois from Gujarat, India at 14 years old, and has spent much of his career advocating for policies that improve the lives of immigrant, refugee, and religious minority communities. He co-founded Chicago Votes, a non-profit that works to engage young voters, and that has played a critical role in the passage of two landmark voting rights laws in recent years in Illinois. Previously, Patel has worked as an anti-violence organizer on Chicago’s Southwest side and Illinois coordinator for Accelerate Change, helping immigrants rights organizations test new models for large-scale, financially sustainable citizen organizing initiatives. Patel is also a proud co-owner of a fair-trade and organic clothing line, ishi vest.

Patel has been a fellow at Green For All, New Leaders Council, Imagining America’s Publicly Active Graduate Education, and South Asian American Policy and Research Institute. He holds a master’s degree in urban planning and policy from the University of Illinois at Chicago, where he helped launch the UIC Social Justice Initiative. Patel lives on Chicago’s Northwest side in the second most diverse zip code in the United States.