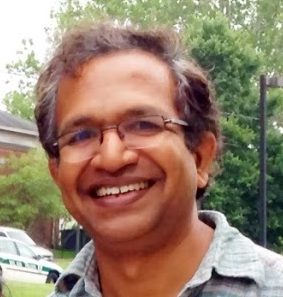 While a graduate student at University of Maryland, Ravi Kuchimanchi founded the Association for India’s Development (AID) in 1991 with the vision “problems are interconnected, so must be the solution.”  AID has matured into a volunteer movement for sustainable, holistic development with 30 chapters in USA, and AID-Australia, AID-UK and AID-India. It brings highly skilled professionals such as the Non-Resident Indian community, to partner with the poor, and underprivileged so that there is a deeper understanding of causes beyond the mere symptoms of poverty.

In 1998, after his postdoctoral work in theoretical particle physics at University of Virginia, Ravi with his wife Aravinda focused on development issues in India such as dams versus people and environment, rural electrification and integrated development. Working in 30 villages of Srikakulam District, Andhra Pradesh, It became clear to Ravi that a poor labourer earning less than a dollar a day lived in darkness, not because s/he can’t afford the energy bill, but because they can’t afford to pay a large bribe of a months wage, to get the connection. In fact the kerosene for oil-lamps that poor use, is more expensive than electricity that could light their home. Such insights helped AID in the US, that raises $1 Million annually and mobilizes nearly a thousand volunteers, extend its support to tackle root causes such as corruption and exploitation rather than just treat the symptoms of poverty.

Passionately interested in pursuing appropriate technology to benefit the underprivileged, Ravi with his colleagues recently adapted the traditional haybox for Indian villages. The “Easy Cooker” that is both made and sold in Indian villages, conserves about 50% energy, saves time and creates livelihoods for bamboo artisans and women’s groups. It saves about 0.5 Kg in carbon-dioxide emissions per use compared to electric rice cooker. With 600 million rice-eaters in India and billions around the world, and priced locally at Rs 130 in villages, it is not only a green technology but is affordable by hard-working rural people who earn $1-2 a day.

In 1999-2000 with his collaborators Ravi developed the pedal power generator to light remote, off-the-grid village schools where students take turns to pedal. Demand for alternate energy in the Narmada river valley in western India, where there is an ongoing struggle against large dams such as the Sardar Sarovar, led Ravi to forge a collaboration between AID and grassroots groups, that electrified 12 hamlets of the tribal village Bilgaon. This inspired the Bollywood film Swades (2005) that became a symbol for Non-Resident Indians interested in India’s development.

Ravi has a B.Tech in Civil Engineering from Indian Institute of Technology, Mumbai and a PhD in Physics from University of Maryland. He has published several papers in international physics journals. His continuing interest and work in physics include the Strong CP Problem, hierarchy problem, leptonic CP violation and left-right symmetric theories.

In 1989 while a graduate student, along with a friend, he obtained a US patent for a toy-puzzle that was featured by NY Times and several Television channels in USA. This was one of his early ideas for raising money to help tackle poverty. However as the economy was slow at that time, despite the interest it generated, it did not get picked up. That was when he hit upon the idea of AID and ever since has been focused on it.